A.G.T.I. in the Post-War Context

The period of the Great War was one of transition for the Alabama Girls’ Technical Institute. While the war did not impact A.G.T.I. to the degree that it did other institutions, the wartime environment did shape the development of the institution for the better part of a decade. More than anything, the war period witnessed A.G.T.I.’s transition from a primarily technical institution to one of collegiate status. Such a shift first appeared at the institutional level in 1919, when A.G.T.I. added “and College for Women” to its name. Four years later, the transition to collegiate status became more defined when the school came to be known as Alabama College, a single-sex institution geared toward providing a college education for Alabama’s women.1

In reflecting on the institutional changes that occurred during the years of the Great War, it becomes apparent that the institution that existed in post-war Montevallo was quite different from the one that existed on the eve of war. This transition, particularly those changes to the school’s curriculum, mission, and student life, is reflected quite succinctly in Lucille Griffith’s Alabama College, 1896-1969. However, the shift was not instantaneous. Collegiate courses were gradually added over time. According to Lucille Griffith, “[i]n 1914, the school added one year of college work, in 1916 a second, in 1917 a third, and in 1918 the fourth.” So it was that by 1918 the Alabama Girls’ Technical Institute offered a four-year course of study. However, as noted by Griffith, “only the home economics department [offered a four-year plan] in time for a student to get a degree in the next four years.” In fact, the first baccalaureate degree was not awarded until 1922.2 The gradual transition to college status meant a shift to providing a more thorough course of higher education, but it did not bring about an end to the school’s historic focus on technical training or high school training. In fact, even as late as the 1923-1924 session, Alabama College offered coursework in secretarial work and home economics, reflecting its earlier focus on providing women with employable technical skills.3

While the academic focus of the institution evolved significantly during the war years, in many ways, student life continued on after the war in much the same way as it had before. The school’s literary societies, including the Castalian, Tutwiler, and Philomathic clubs, continued to operate, allowing the students ample opportunities for individual study and self-expression outside of the classroom. Glee Club, dramatic performances, and the Home Economics Club also appear to have been quite popular. As was the case during the war years, sports continued to be a major part of student life at the Alabama Girls’ Technical Institute and Alabama College. Basketball seems to have been particularly popular among the classes. From this brief sampling of student activities at the school, it would appear that there was a degree of continuity between the pre-war and post-war years. In some ways, this demonstrates that student life at the small, insular school was largely unaffected by the ravages and hardships of the war years.4 However, to say that there were no new creative efforts or student endeavors would be quite misleading. Perhaps the greatest legacy to come from the Great War years is the tradition of College Night, Montevallo’s famous homecoming tradition. The adoption of this tradition is one of the clearest examples of A.G.T.I.’s transition toward collegiate status. The following blurb about College Night in the 1919 Technala demonstrates that such a transition was apparent even then to the students of A.G.T.I.:

Now that our school is becoming a college, we have begun to take up college stunts. One of the first of these was a college night, which was celebrated March 3rd. All classes participated and were rivals for the best entertainment. The Seniors won, but that was as it should be. All enjoyed this night so much that it will probably become a custom for all succeeding years.5 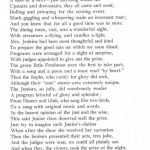